The Start Up Nation Book

I'm Shlomo (Momo) Lifshitz, I'm the founder and CEO of Lirom Global Education (Study in Israel LLC) and hope to fulfill the vision of making Israel a center of global education by bringing oversea students to study abroad in Israel, the Start-Up Nation. In my past, I founded and ran Oranim Educational Initiatives for 25 years bringing almost 150,000 young people to various trips to Israel.

Start-up Nation: The Story of Israel's Economic Miracle was written in 2009 by Dan Senor and Saul Singer. Dan Senor is a former foreign policy official for the U.S government and previously served as chief spokesmen for the Coalition Provisional Authority in Iraq. Saul Singer is a columnist and former editorial page editor for The Jerusalem Post.

The book, which has become an international sensation, examines "how is it that Israel—a country of 7.1 million people, only sixty years old, surrounded by enemies, in a constant state of war since its founding, with no natural resources—produces more start-up companies than large, peaceful, and stable nations like Japan, China, India, Korea, Canada, and the United Kingdom?” 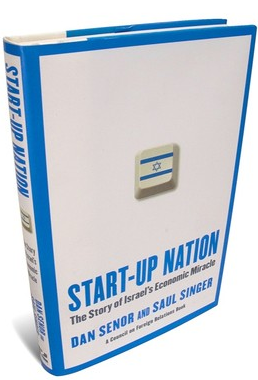 The book attempts to provide an explanation for Israel’s immense success in the field of start-ups, ruling out the “unitary Jewishness” and individual talent of the Israeli people. Senor and Singer focus on the mandatory military service each Israeli is required to do as well as the immigration waves that built the country as the main factors for the economic growth Israel has seen. The non-hierarchical environment of the Israeli Defense Forces (IDF) alongside the minimal guidance and reliance on creativity and intelligence are perceived as the driving factor behind the economic growth and entrepreneurial nature of Israelis. The book also attributes the success to the role of immigration on Israel’s economy, stating that “Immigrants are not averse to start from scratch. They are by definition risk-takers. A nation of immigrants is a nation of entrepreneurs.”

Using anecdotes, stories and facts about Israel’s achievements, the book brings to light many innovations and technological advances that were made possible by Israeli minds such as the Google Suggest option and the Given Imaging microscopic camera embossed in a pill. After publication, the book became an international sensation and policymakers around the world have adopted the book as a guide for promoting entrepreneurship.

The Start-Up Nation was on The Wall Street Journal bestseller list, and was ranked 5th on The New York Times business best-seller list.