Are you hungry? In which language should we talk about it?

Food is culture, culture is language

Every traveller knows there are two ways to really get to know a place, any place in the whole wide world: through its people, and what they eat.

Food has always been a major attraction for those who are eagger to deeply understand a people as a whole: it can tell the story of a region through its natural resources or, in other words, it proves that what we eat is undeniably related to who we are. When you see a plate of hummus with just a bit of tahini, paprika and a touch of olive oil, you wouldn't think of any other place than the Middle East.

That is why in Study Arabic in Israel's programs you will have weekly field trips to local Arab villages in the Wadi Ara area, having the chance to put your class knowledge to the test. Pronouncing correctly what you order at a local restaurant could be the difference between finishing the whole plate or having to politely try and finish what you order by mistake.

To receive more info about our programs and about our views on immersion, please visit www.arabicinisrael.com

Christmastime in Haifa is a celebration of Arab food 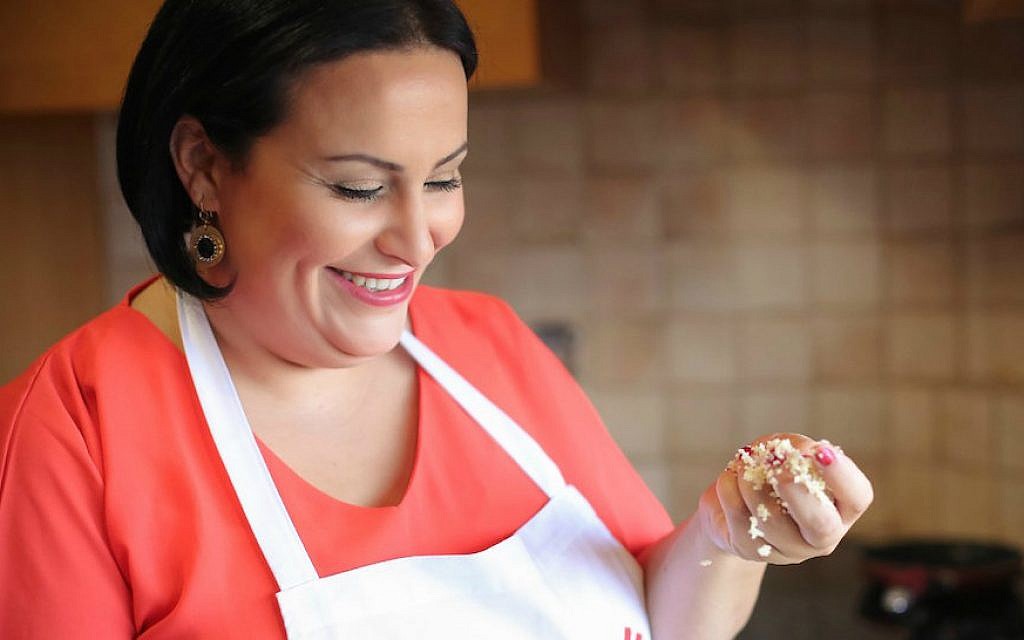 Nof Atamna-Ismaeel, the first Israeli Arab to win on “MasterChef Israel,” brings Jews, Muslims and Christians together through the A-Sham festival. (Ehab Shukha, via JTA)

JTA — They say that man’s heart can be reached through his stomach. Every Christmas, chef Nof Atamna-Ismaeel hopes the same can be said for the heart of Israeli-Arab coexistence.

Atamna-Ismaeel — a 37-year-old native of Baqa al-Gharbiya, a predominantly Arab town near the northern Israeli city of Haifa — wowed audiences in Israel during the 2014 season of “MasterChef Israel” with her creative amalgam of modern molecular gastronomy and traditional Palestinian recipes. She won the season, making her the first Arab contestant to take home the prize, and quickly set her sights on Haifa as the ideal setting to bring Israel’s Muslim, Jewish and Christian communities closer together through food.

Three years ago, Atamna-Ismaeel launched the A-Sham food festival, an annual celebration of Arab flavors — from kadaif, a sweet cheese pastry, to kubbeh, a dumpling soup. Last year’s event, from December 13 to 15, drew a record crowd of nearly 50,000 to this city’s rapidly gentrifying downtown.

“Our heterogeneity is our beauty and the beauty of Israeli food in general,” Atamna-Ismaeel told JTA. “It’s not interesting when everyone is the same. And Haifa is the perfect setting for this.”

Haifa is considered a model for Arab-Jewish coexistence, with Jews and Muslims working and living side by side. Israel’s third largest city has been proudly celebrating its multicultural heritage every December since 1994, when the roving Muslim festival of Ramadan happened to fall smack in the center of the Christmas and Hanukah holidays. That year, Beit Hagefen, a local Arab-Jewish cultural organization, launched Holiday of Holidays, a festival to celebrate the unique trifecta. An annual Christmastime tradition was born. 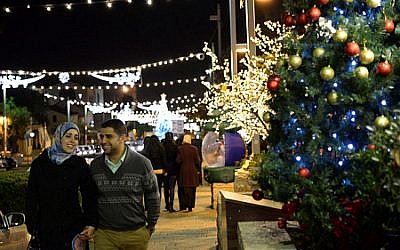 Young Arabs walk by a decorated Christmas tree in the German colony, in the northern Israeli city of Haifa, a few days before Christmas, December 22, 2014. Photo by Sapir Bronzberg/FLASH90

For two consecutive weekends each December, Holiday of Holidays brings twinkling Christmas lights, street parties, craft workshops and concerts to both downtown Haifa, a recently spruced-up urban strip that hugs the industrial Haifa Port, and neighboring Wadi Nisnas, an artsy district populated mainly by Christian Arabs that is known for its vibrant food market. The festival finale will be held December 20-22.

Since 2015, however, the A-Sham festival — the name comes from the Arabic word for the Levant region, which spans the Eastern Mediterranean — has been the undisputed star of the show.

“There’s so much good food to be had in Haifa,” said Jessica Halfin, a food and culture writer who lives in Haifa and also gives culinary tours. “The A-Sham festival is a great excuse for people of all backgrounds to come to get to know the amazing downtown food scene that we have here while also having a chance to try new and unexpected dishes and flavors from the Arabic kitchen.”

Expanding on the idea of people from different faiths and religions connecting through food, Jessica claims that “they’re not walking around with a sign that says ‘Coexistence is great!’ or ‘We want coexistence!’” she said, laughing. “They’re just living it. Here in Haifa, it’s not a slogan. It’s actually happening.”

This year, Atamna-Ismaeel convinced more than 70 chefs to spend the weekend cooking and collaborating in Haifa. Despite their varied backgrounds, the menus stayed true to the theme of Arabic cooking and the unique flavors of Levantine culture.

Jewish, Muslim, Druze and Christian chefs were installed in the kitchens of local Haifa restaurants to create a special dish. Bright posters hung outside each participating spot and hungry visitors, armed with maps highlighting the A-Sham route, could purchase and taste each plate for 35 shekels (approximately $10).

Read the full article at The Times of Israel